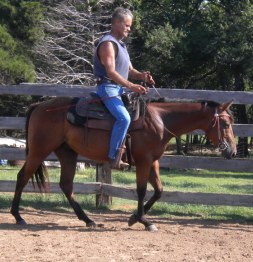 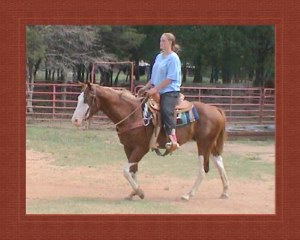 
Sold to Jerry Stull of Missouri 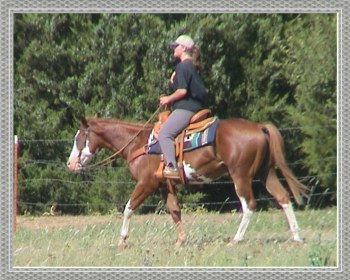 Jan's Triumph 2004 Gelding by Skip N Dee Bar out of Dame Gina. His dam is full sister to an IBHA Buckskin World Champion who sold for $22,000 the night I bought her! This colt is really bred.  He has had 30 days of training and is already showing his Western Pleasure potential!  Smooth, slow gaits, calm under saddle. You won't have to lunge him for 30 minutes before you show him!   More pictures and pedigree here.   Price $2,000. 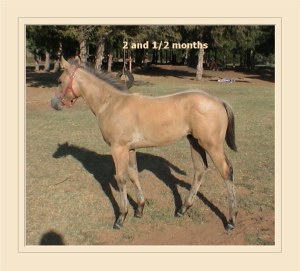 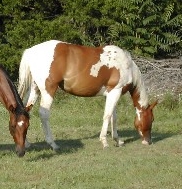 1999 APHA Tobiano Mare by Ol Jo Tee out of Bery Bery Swift
Excellent Barrel Prospect!!!
This mare is speed bred all the way!!  Her dam is a half-sister to the great barrel racing mare Be Bery Swift (AQHA Amateur World Champion in Barrel Racing in 2004, 2003, 2002, 2000 and 1999). AQHA Results for Be Bery Swift.  Her sire is a son of the famous race horse Olympia Joe (so famous, there is a stakes race named after him).


She is broke to ride, but has not been started on barrels yet.   She has been bred to Skip N Dee Bar for 2006.

1996 APHA Palomino Tobiano Mare by  Colton's Durango out of Marlboro Moonback.  Topper is speed bred.  Texas Dancer on top and Top Deck, Go Man Go and Moondeck on bottom.  The 3 year old colt above is out of her.   She throws very large foals, and although not halter quality, the foals with Skip N Dee Bar are easily show quality in WP or performance. The filly below is by Skip N Dee Bar.  She is rebred to Skip N Dee Bar for a 2006 foal. 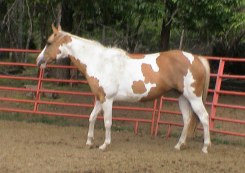 Skip Over Scotch 2000 APHA Red Roan Overo mare by Skips Contention out of Sheza Hot Scotch.  (Not Available - Sold to Jennifer Kelley  of KickinKRanch in Texas)  Skips Contention carries the lines of Skippa Lark, Skippa String, Sippers King, Skip N Chant, Skippa Sure Bar and Skipper W. The bloodline of Skipper W/Wiescamp horses are well known for their ability as an all around horse. Skips Contention earned his ROM in Halter in just 2 shows, going 1st under all judges with 5 Grand Championships, 2 Reserve Grands, and 16 points with the APHA. He was on the 2001 National APHA Open Honor Roll, as well as being the NWCC High Point Aged Halter Stallion.  Her dam is by  Hot Scotch Man.  No Impressive breeding.  She had a tail down to the ground before she foaled. Now I know where it went! 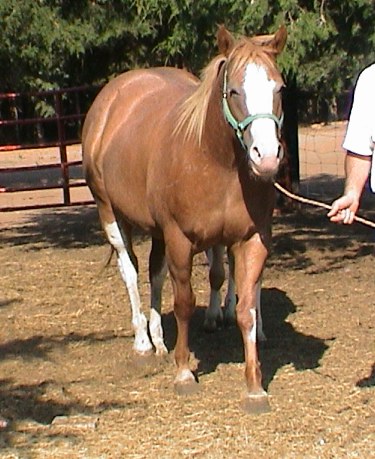 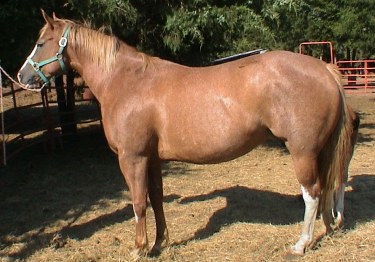 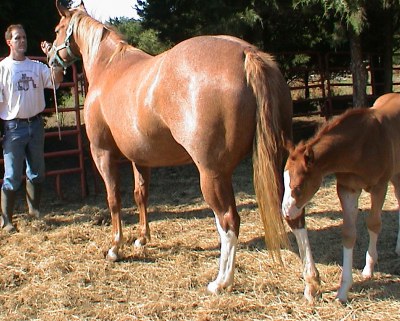 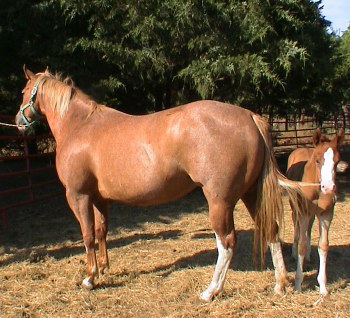 The following horses are no longer available. 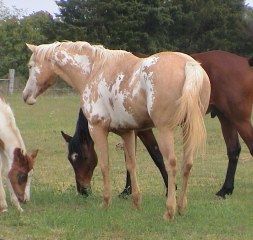 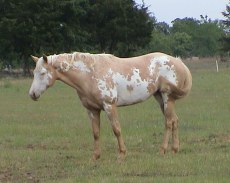 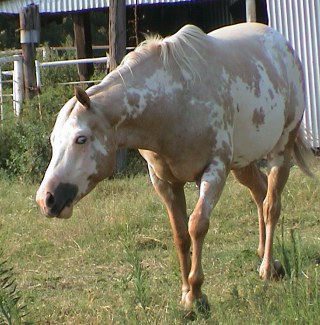 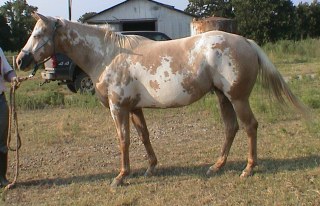 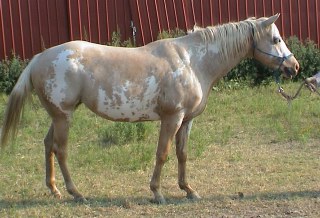 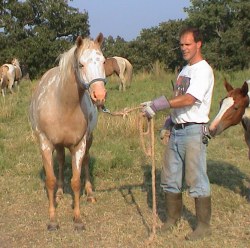 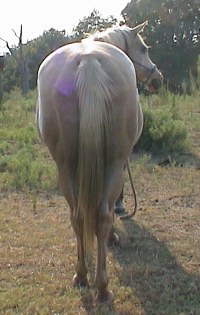 Sold - DANCING JO TEE  - 2002 Gelding by Ol Jo Tee (son of Olympia Joe) out of Top Deck Dancer.  "DJ" Jumps easily and readily.  DJ is speed bred and would do good in any speed event, be it track racing, barrels or roping.  His sire is still actively roping.  His sire's sire (Olympia Joe) has a ROM in racing, who went on to rope.  To this day Sallislaw, Oklahoma has an Olympia Joe Stakes race.  Approximately15 hands.  DJ is a likeable horse. Willingly does what you ask of him. Still is a little playful though at just 3 years, so he is not suitable for a ''beginner.''   His dam is heavily Top Deck bred, (4 times) including Moondeck and Go Man Go. He has nice suspension and extension, so he has the potential to be an eye-catching dressage competitor.   Price $1,500.  First day of ground driving.  Standing for farrier. 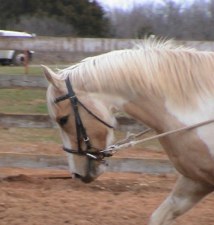 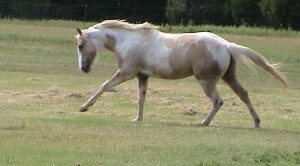 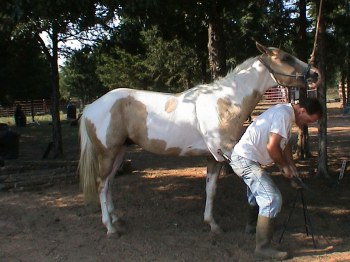 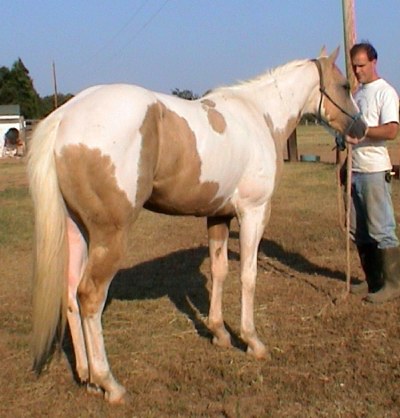 New pictures at 7 months below 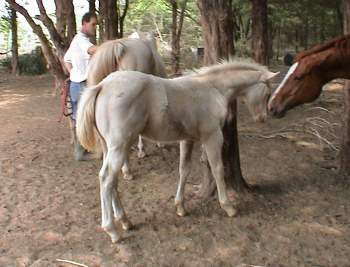 6 months old:  Please excuse the miserable looks. It was 95 degrees when I took the shot.  The pictures do not do him justice. He is really much better looking in person. 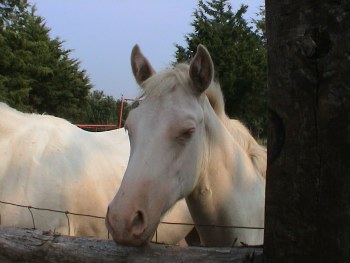 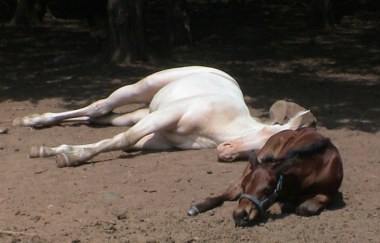 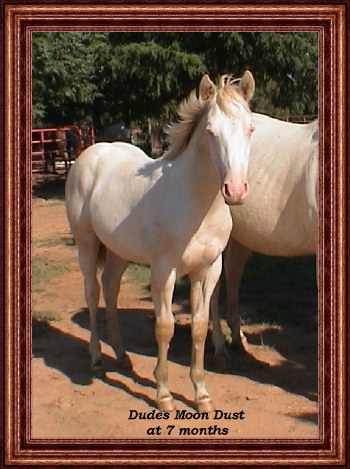 February 2005 CREMELLO AQHA/APHA colt.  See him on the foals page. 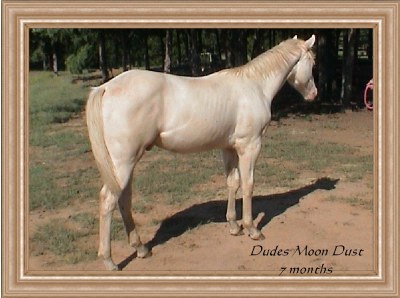 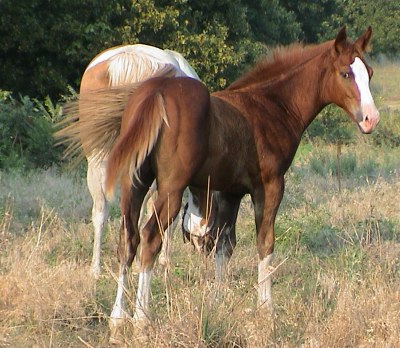 For sale at $700.
Congratulations to Samuel of Yale, OK.